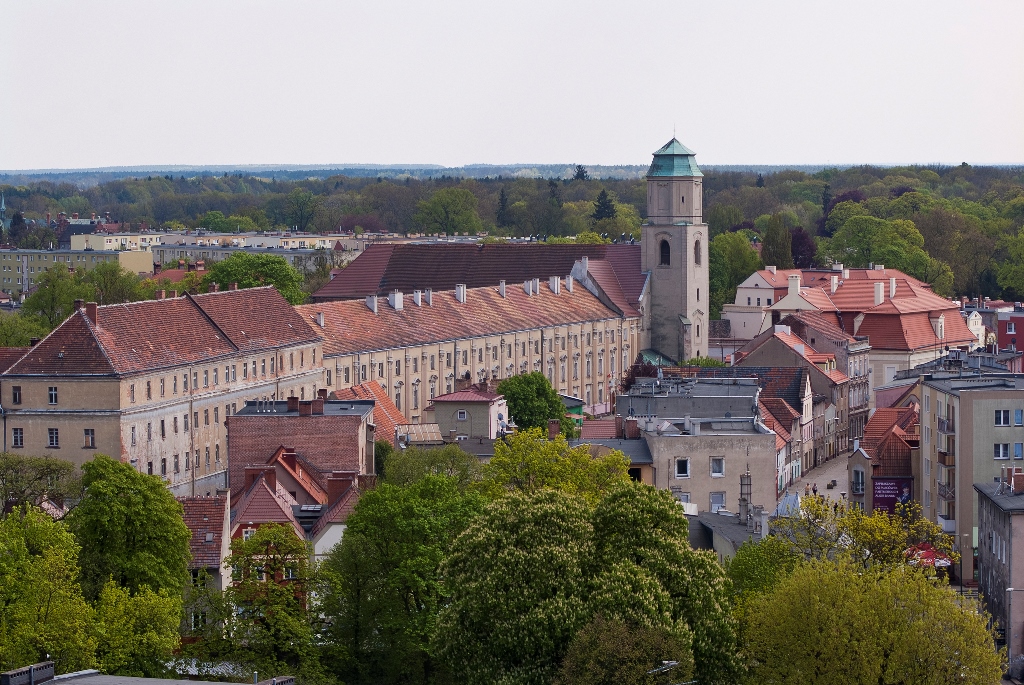 Gimnazjalna Street. The first building of the college erected in 1655 was destroyed after 13 years by a fire. A southern wing of the present baroque structure was built in its place. It was designed by an architect of the Lobkowics, the architect of the palace – Antonio della Porta.

In 1733 the college was enlarged, and an assembly hall was built and in the second half of the 18th century – a three-winged northern part. After the order of the Jesuits had been annulled and the estates sold in 1787, the southern part of the building was appropriated for a school, whereas the northern – after a thorough reconstruction and elevation – for the prison for women.

Since 1945 the northern part has been the seat of the Police Headquarters. The southern wing was adapted in 1963-1965 for the Textile-Trade School Complex.

ST. PETER AND PAUL CHURCH was funded in 1293 andit was intended for the Franciscans who arrived in Żagań in 1284 and soon erected a monastery and church. Abandoned during the Reformation of the monasteries it fell into ruin and ten the church was taken over by the Protestants. In 1633 the church passed into the hands of the Jesuits, who erected an impressive college on the site of the monastery.

The first college building, erected in 1655, was destroyed 13 years later  in a fire. In its place the south wing of the current Baroque structure was built. It was designed by the court architect of the Lobkowicz family and the builder of the Ducal Palace – Antonio della Porta.

After the dissolution of the Jesuit Order in 1773, the south section was made into a school, while the north section, after radical rebuilding and heightening, was designated as a women’s prison. The south wing was adapted in 1963-1965 for the needs of the Complex of Textile-Secondary School.

NEWS FROM THE CITY